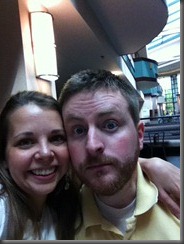 Darin is down to his final year of the 20s. The kids were more than excited to celebrate. When Luke woke up, I mentioned it was Daddy’s birthday and he ran to the kitchen to get his birthday cards and took them to Darin in the shower. “daddy, its your birthday. You gotta open your cards. Oh, I’ll do it for you.” He couldn’t believe all the birthday money Daddy got!

Aaron and Dawn knew that Darin has been wanting to get a dog, so they decided to get him one for his birthday! 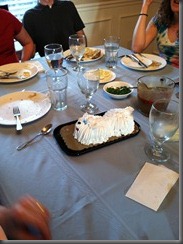 Such a good dog. Yes you are! and tasty too!

I mentioned we were going to surprise Daddy for lunch around 9:30 and Luke wanted to go right then. I told him we had to make cupcakes first. Then we showed up with Arby’s and dessert. Yum! 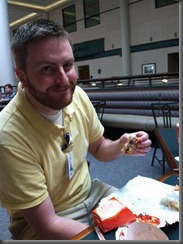 the world’s longest fry ever! 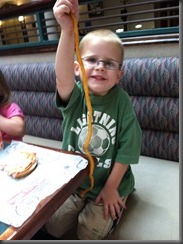 We didn’t even wrap Darin’s presents until a couple hours before he got home, just so the kids wouldn’t be tempted. Of course as soon as he did get home, Natalie told him what he got!

and of course, they opened them for him… 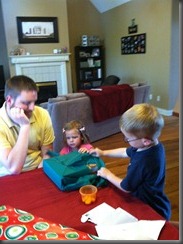 He got his golf clubs fitted to his swing, and a game, and a treasure box with candy (and now he has a hiding place for all his treasures!). A few more surprises will arrive this week. We went out to dinner at La Cazona for some good mexican eats and headed to Luke’s t-ball practice. We ended the night singing and everyone blew out a candle on their cupcake. Don’t you love how interactive birthdays are?!

Another year older, but just as handsome as ever! I love this guy!